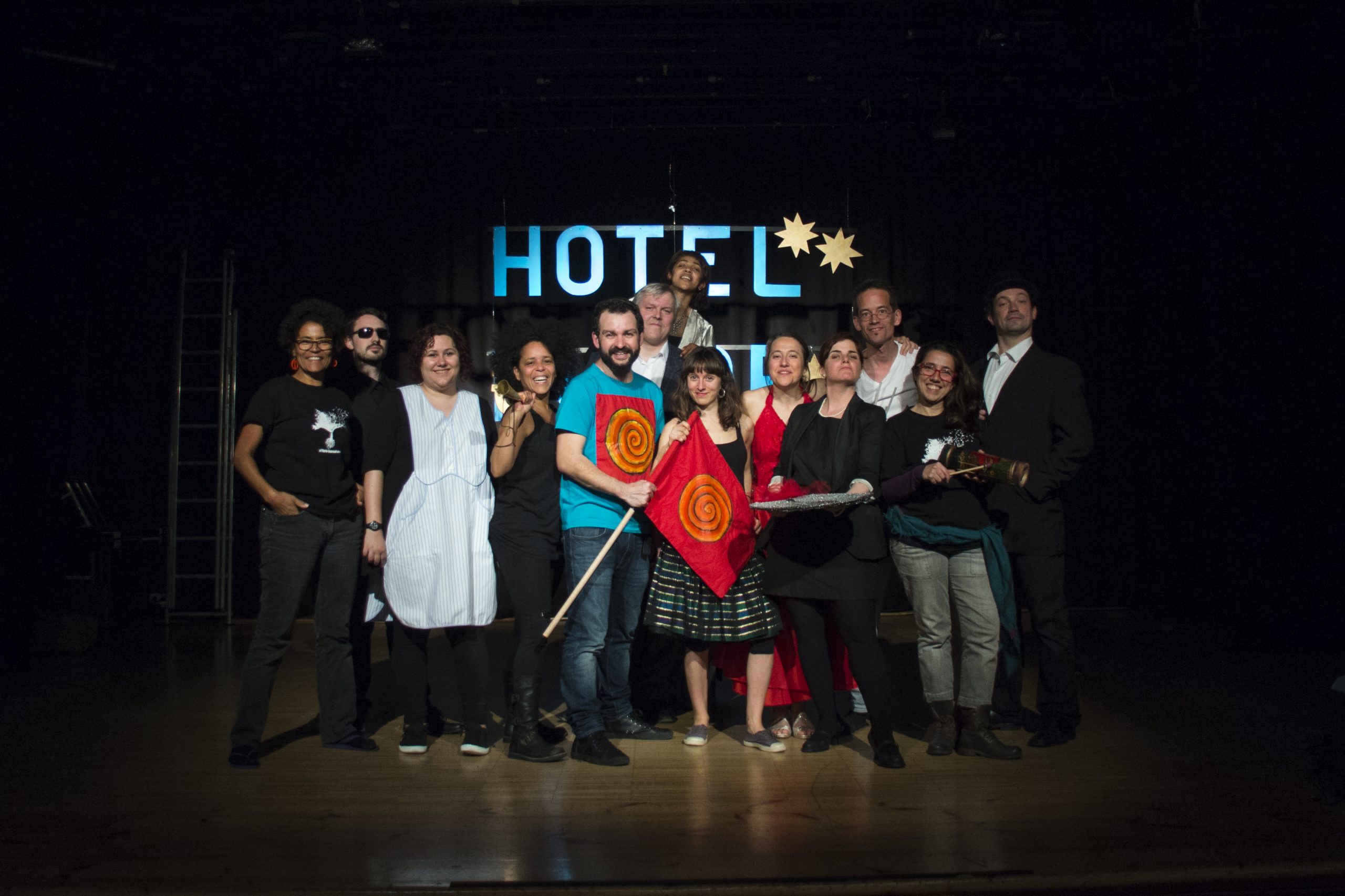 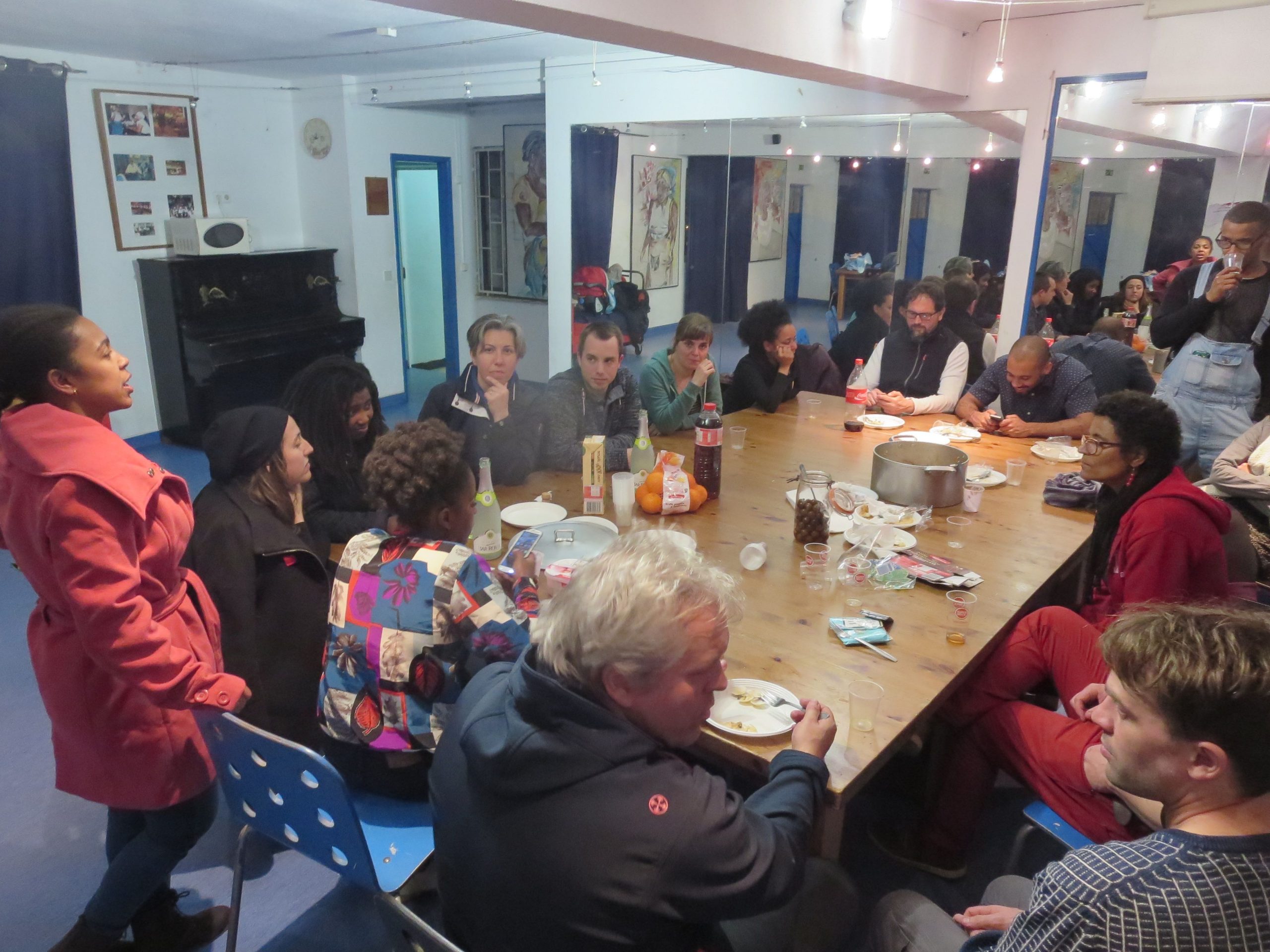 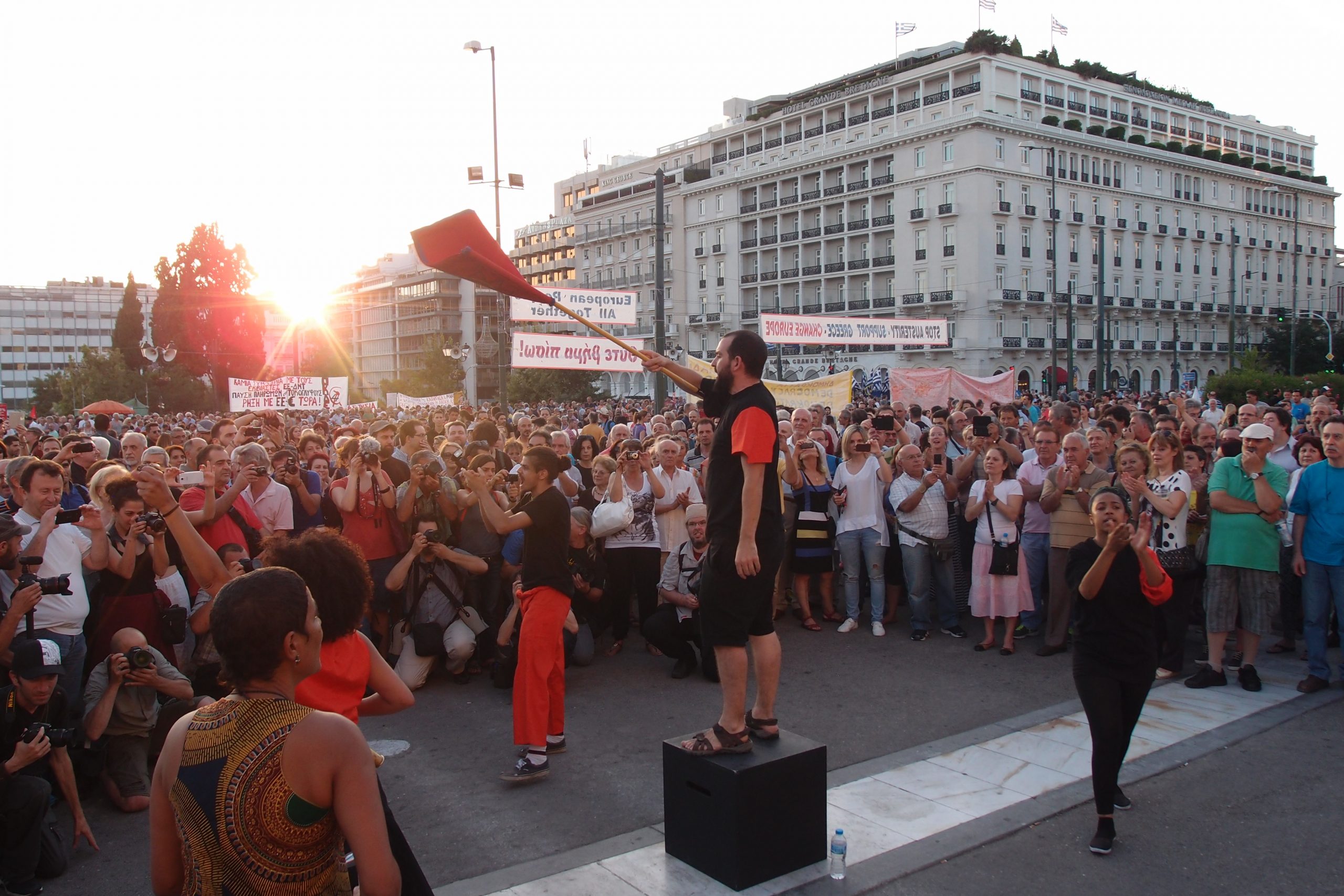 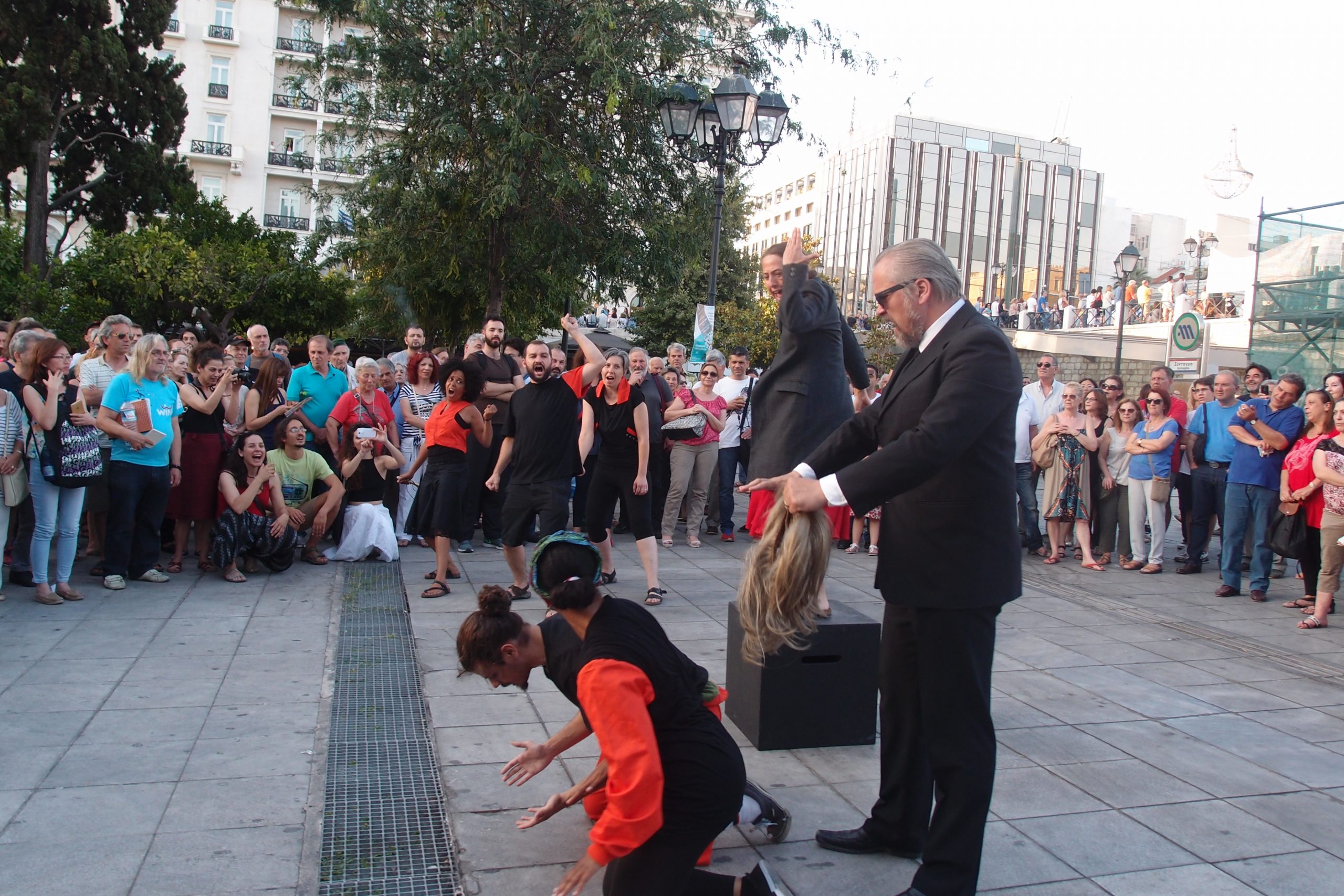 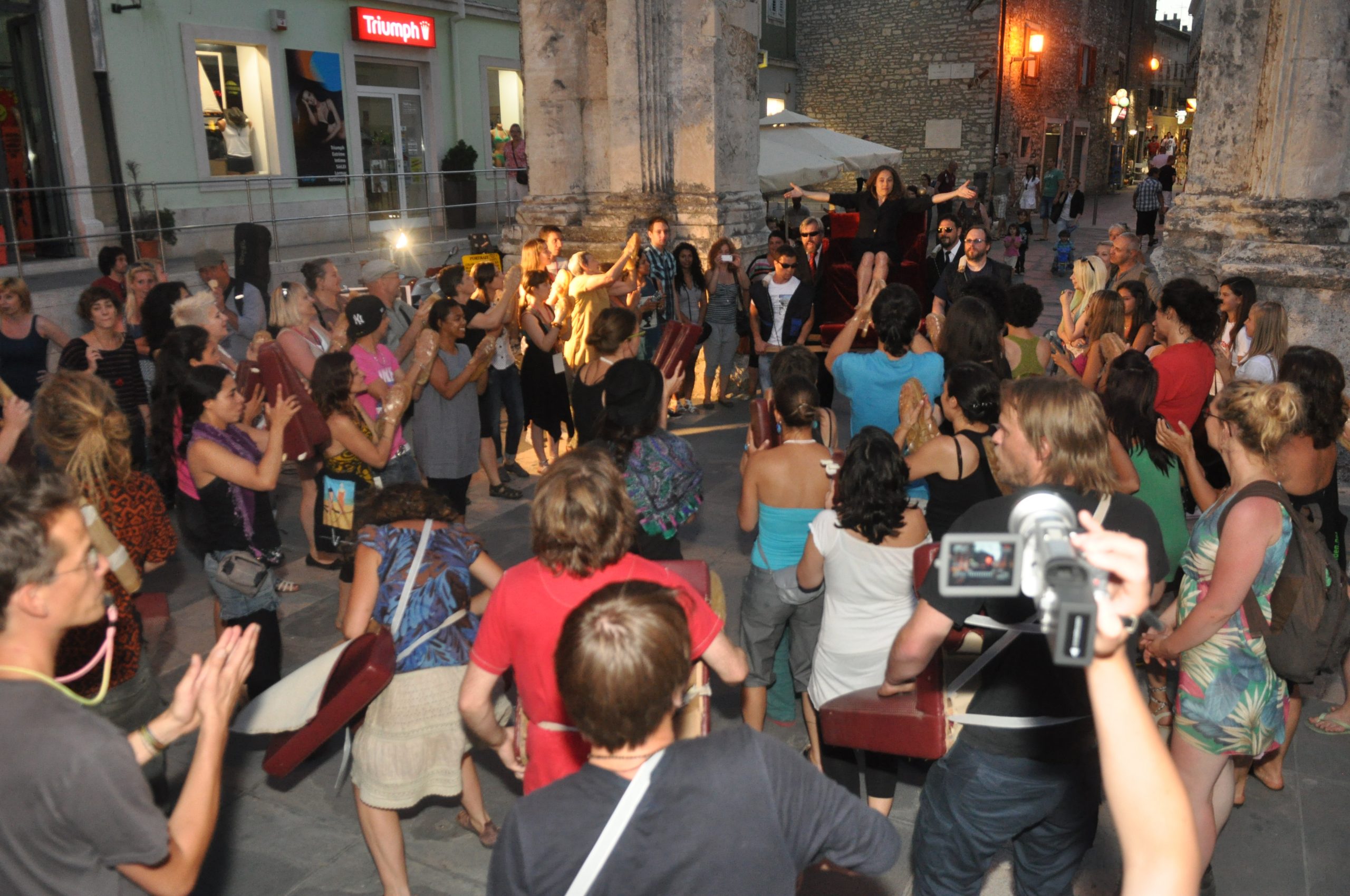 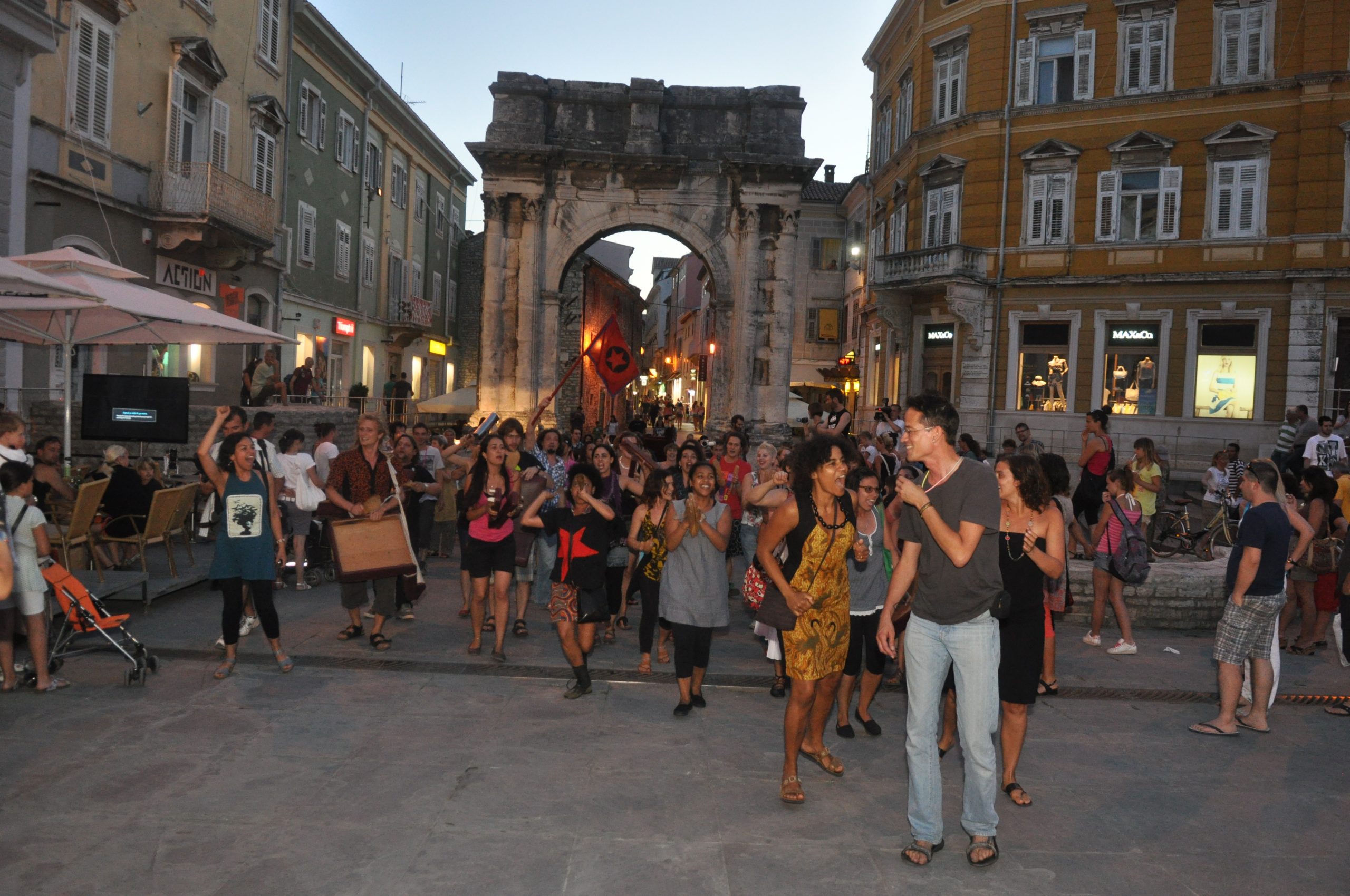 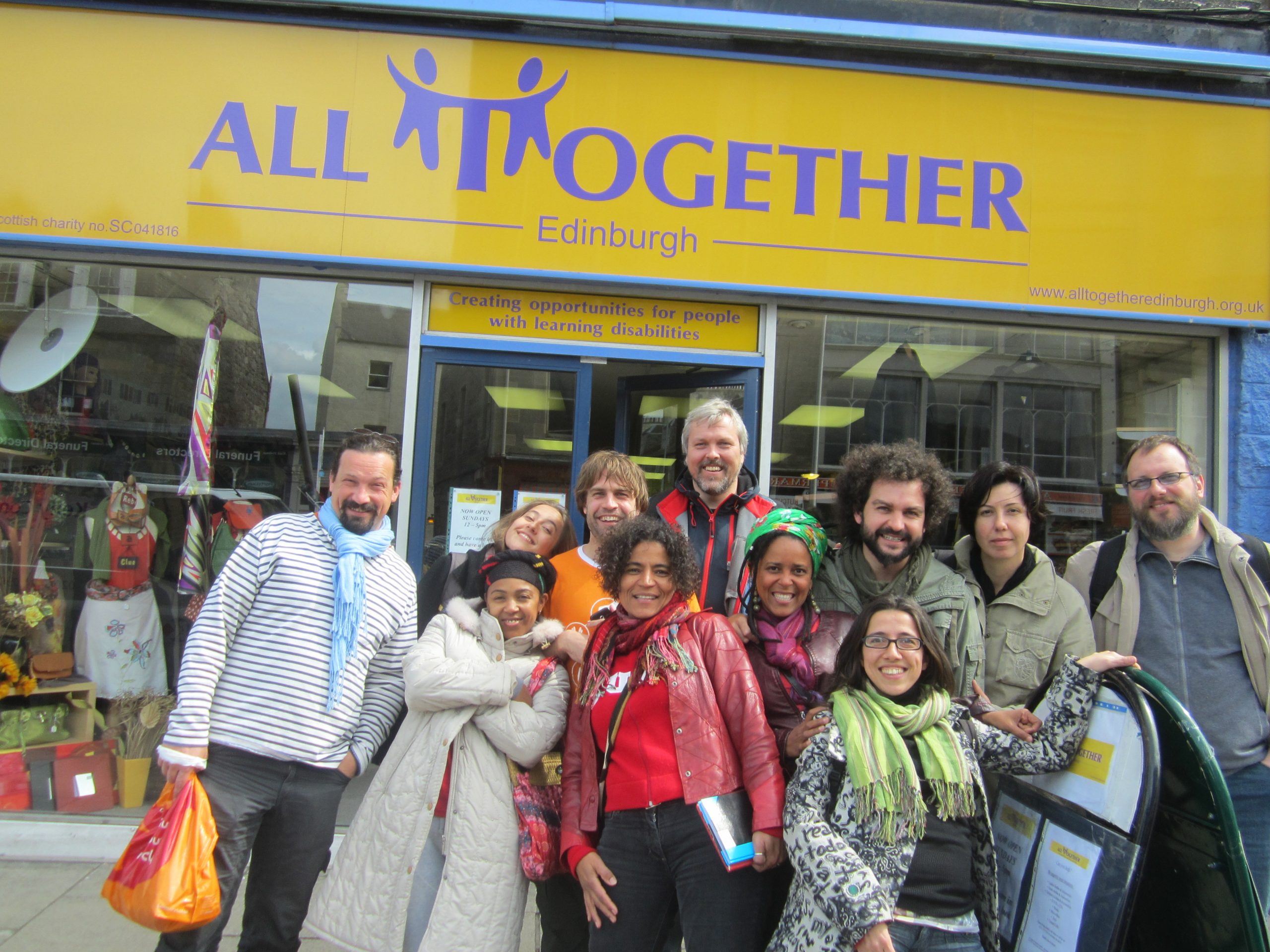 (…) In March 2011, in Lisbon, Portugal, under the coordination of GTO-Lisboa, we began the debate and planning process that would give birth to the TOgether Project. (…) The methodology was based on a reflection–production–reflection dynamic, in which participants would seek to improve their training as Method artists-activists. I prepared ten modules to be worked on during in-person encounters. From 2011 to 2013, we held between three and four in-person gatherings per year, each time in a different country. In the first stage of work, in each encounter we developed specific content in the form of seminars, workshops and/or courses. Following, or in parallel, the “studied” content would be applied to a joint theatrical production. We created the Forum Theatre performance HOTEL EUROPA, about the European crisis (economic, financial, bank, political, ideological and identity). (…)

The topic’s complexity (interweaving different aspects found at the intersection of oppressions) challenged us to develop diverse pathways for constructing the Forum’s central and complementary questions. During the process, Newspaper Theatre was a critical strategy, along with analysis of the Forum sessions held live in each country. The diversity of responses from different audiences indicated the direction our research should take. With each specific experience we came closer to the questions that we really wanted to pose to society. This was a dynamic learning process that produced effective results. (…)

After each in-person encounter, on returning to our home countries the task was to apply the contents and experiences we had developed together, through community group productions at the local level. The subsequent in-person meetings would allow the different organisations to get to know each other’s practical actions, and facilitate interaction among the groups.

Over the course of the process, we experimented with several forms of evaluation and we also held specific seminars to discuss the initiative’s development. This exercise allowed us to modify the project’s route several times, trying to find alternatives for overcoming the challenges we identified. Several of the modules I had prepared were readapted and/or radically transformed as a result of our experience at each stage of the process.

This analysis led to intensifying the exchange among community groups connected to the different institutions involved. (…) The 2013 edition of the Pula Forum Festival became a gathering of Forum Theatre groups, who showcased a highly developed aesthetic-political (Aesthetics of the Oppressed) body of work. In other words, these plays were eminently theatrical, while maintaining an explicitly political proposal for debating the transformation of reality.

All the organisations involved in the initiative benefitted from the process and were able to use the results in the development of their local work, both for the aesthetic refinement of their performances and in deepening their political action. Furthermore, several of the initiatives involved specific partnerships among organisations participating in the project. For example, Pas à Passo, from France, and Portugal’s GTO-Lisboa, joined forces to discuss racism and the question of European identity for young Black men and women from migrant families.

The HOTEL EUROPA show, whose original goal was to be the laboratory for applying each module’s concepts and techniques, became an international reference for artistic production in Forum Theatre.

During the project, HOTEL EUROPA was performed first in Lisbon in embryo stage, then as a show in two editions of the Pula Forum Festival in Croatia, and at the Ljubljana Forum Theatre Festival (Slovenia). It showed at the KURINGA space and gave performances two years in a row at Berlin’s Tyatrom Theatre. It was also included in the Forum Theatre exhibition organised by Active Inquiry in Edinburgh, Scotland.

In 2014, after the project’s end, the show put together a series of events organised by the University of Bologna to discuss the methodology used and to present the initiative’s final results.

In June 2015, amidst the polemics unleashed by the crisis in Greece, we set up a partnership with local Theatre of the Oppressed practitioners to create a concrete action in support of social movement resistance efforts. HOTEL EUROPA had a run in several theatres in Athens. The show’s scenes on capitalist exploitation were transformed into performance pieces for public spaces, used in a mass demonstration at Syntagma Square, in front of the national Parliament building. The image of our performance crossed borders, appearing in other countries’ media and even on the cover of Spain’s El País daily paper.

The TOgether project became TOgether International Theatre Company. In 2016 it spent a season in Portugal (Lisbon) and participated in Scotland’s Edinburgh Festival. In 2017, in Barcelona and Bologna.

The process that we lived and are still developing with TOgether represents both for me and for those of us in KURINGA an extraordinary step forward in terms of qualification experiences.

The systematisation of TOgether became the foundation of the KURINGA Theatre of the Oppressed Qualification Programme, which debuted in 2013(…)